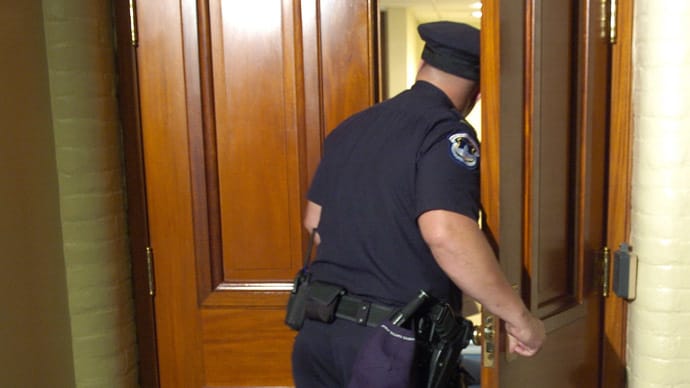 Quite frankly, it can be hard to understand your constitutionally protected rights. Stipulations and exceptions have been established by decades of court precedent. Doctrines and “tests” have been adopted which can be extremely difficult to digest.  Some literature on the subject published on the internet is misleading, adding to the confusion. We implore you- no matter how complicated and baffling understanding your rights may be- do not give up.

The Fourth amendment to the Constitution reads, “The right of the people to be secured in their persons, houses, papers and effects, against unreasonable searches and seizures, shall not be violated, and no Warrants shall issue, but upon probable cause, supported by Oath or affirmation, and particularly describing the place to be searched, and the persons or things to be seized.” So, the government cannot enter your home without a warrant. But what else does this right protect you against? Where else does this right protect you? Are there any exceptions?

The Fourth amendment applies explicitly to those acting on behalf of the government. Non-governmental actors do not have to adhere to the same guidelines. Private investigators, for example, are not nearly as constricted in their actions. Likewise, security guards do not have to obtain a warrant before searching your bag.

In order for a governmental actor to enter your home or invade a private area, he or she must obtain a warrant. Warrants require probable cause, meaning there is enough evidence that a rational person would believe that a crime was committed. Though a warrant may be seen as a free ticket into your domain, it ultimately protects your privacy. Without a warrant, actions of governmental actors are restricted.

Take the decision in Weeks v. United States (1914), for example. In Kansas City, MO, police officers used a hidden key to enter the home of Fremont Weeks while he was out. The police searched his home and seized evidence. The court ruled that, without a warrant, this search and seizure was unconstitutional.

The significance of obtaining a warrant is not taken lightly- for police, the ends do not justify the means. This is illustrated by the decision in Mapp v. Ohio (1961): in 1957, the home of Don King, racketeer and boxing promoter, was bombed. Police received a tip that suspect Virgil Ogeltree was hiding in Dollree Mapp’s home. Mapp’s lawyers advised her to refuse the police entry until they had a warrant. When Lieutenant White arrived, the police forced entry into her home, and produced a blank sheet of paper that they falsely claimed was a warrant. The police found Ogeltree, and seized an unloaded gun, obscene sketches and books from the home. After hearing this case, the court held that all evidence obtained by this unconstitutional search and seizure was inadmissible in court.

The Fruit of the Poisonous Tree doctrine

The groundwork for the Fruit of the Poisonous Tree doctrine was laid in Silverthorne Lumber Co. v. U.S. (1920). Silverthorne, the owner of the lumber company, was arrested under suspicion of federal violations. While detained, the police conducted a warrantless search of the company during which papers, books, and notes were seized. Based on information found in those illegally seized items, the police requested further documents. The court approved the request. When Frederick refused to produce the documents, he was held in contempt in court.

This case was appealed to the Supreme Court. The government argued that, although the documents were obtained illegally and were therefore inadmissible, they ought to be able to keep copies of the documents and use the information gathered against Silverthorne. Overturning the contemplation charge, the Court held that this was impermissible. The majority opinion reads, “The essence of forbidding the acquisition of evidence in a certain way is that… it shall not be used at all.”

The Fruit of the Poisonous Tree doctrine protects us from a multitude of improprieties. If the police conduct an illegal wiretap in order to find drugs, without another source of information, the drugs and conversations are inadmissible in court. If the police conduct a warrantless search of your home and find evidence of a storage unit they suspect may be used to store illegal goods, the police may not obtain a search warrant for said property without further evidence.

There are four exceptions to the doctrine:

Enter the Plain View doctrine- if something is out in the open in an area not conventionally thought to be private, the police do not need a warrant to search or seize said contraband. Say you were pulled over for failing to stop at a red light, and the police officer notices a handgun laying on the backseat. Because the gun was in plain view, the officer may seize the gun under the assumption that you are in illegal possession of the weapon.

There is a two-part test often used to evaluate the Fourth Amendment’s applicability. The first prong of the test is: Did the person actually expect some degree of privacy? The second prong is: Is this person’s expectation objectively reasonable?

This test was established in Katz v. United States (1967). The government planted a microphone in a public phone booth to listen to and record Katz’s phone conversations. The Court held that the government had violated Katz’s Fourth Amendment rights because he reasonably assumed privacy once he shut the phone booth door.

Where else can you reasonably assume privacy? You can assume privacy in your movements, at least in part. In United States v. Jones, the police attached a GPS tracker without a warrant on the bottom of Jones’s Jeep. The GPS was used to monitor his activities for nearly a month, updating every ten seconds. The Court ruled that this was an unreasonable search, and rejected the government’s claim that one cannot assume privacy in their movements on public roadways.

You can assume privacy in and around your home. In Florida v. Jardines (2013), the Court ruled that the police had violated Jardines’s Fourth Amendment rights by bringing a drug sniffing dog onto his porch to detect the presence of illegal drugs inside his home. The Court found that the police had, without warrant, trespassed on Jardines’s property. This decision extended Fourth Amendment protections beyond the home, onto the front porch. Subsequent court rulings have established that the Fourth Amendment protects you in your curtilage, which includes the home, front porch, and fenced-in backyard.

The fenced-in backyard stipulation cannot be interpreted too broadly. Take Oliver v. United States (1984), for example. The Kentucky State Police searched Roy E. Oliver’s farm under the suspicion that he was growing marijuana. Without a warrant, they crossed onto his property bordered by a fence and a “No Trespassing” sign. The open fields doctrine, which states that a person’s Fourth Amendment rights does not extend to open fields, was called into question.

The Court was asked: Does this doctrine apply when the police knowingly enter privately owned open fields without a warrant? The Court held that the doctrine still applies, as one cannot assume privacy for activities conducted in open fields outside of the area immediately surrounding one’s home.

Technology has greatly complicated the courts’ interpretation of Fourth Amendment rights and protections. It is hard to imagine what the Founding Fathers would have to say about drones, Facebook statuses, cell phone records, and other intangible properties that are subject to searches. The courts tend to have just as much trouble projecting the Founding Fathers’ ideas onto a 21st century America; though there have been several important rulings that will likely set the precedent for years to come.

Let’s start with drones. Drones are now readily accessible in the public market, equipped with sophisticated cameras that can spy what the human eye cannot. Use of such surveillance equipment seriously calls the plain view doctrine into question- what if something is located in your curtilage but is in plain view of a drone?

The court unknowingly began consideration on the issue in 1989 with the ruling in Florida v. Riley. In this case, the sheriff’s office received an anonymous tip that Riley was growing marijuana on his property. Because of a fence, the police were not able to see into Riley’s greenhouse from the ground level. Without a warrant, officers took to the sky and made naked eye observations of marijuana plants from a helicopter. The department procured a search warrant based on these observations.

It was argued that the aerial surveillance was an unconstitutional search and all evidence seized after the search warrant was, in turn, fruit of the poisonous tree. The Court held that the Fourth Amendment does not require police traveling in public airways at an altitude of 400 feet to obtain a warrant in order to observe what is visible to the naked eye.

Rulings that are applicable to drone surveillance continued in 2001 with the ruling in Kyllo v. United States.  Danny Kyllo was also suspected of growing marijuana. A Department of the Interior agent used a thermal imaging device to detect hot spots which may be indicative of heat lamps used in marijuana production. When those hot spots were detected, a search warrant was issued for Kyllo’s property. The Court held that this form of surveillance was unconstitutional.

For the majority opinion, Justice Scalia writes, “As here the government uses a device that is not in general public use, to explore details of the home that would previously have been unknowable without physical intrusion, the surveillance is a ‘search’ and is presumptively unreasonable without a warrant”.

Together, the decisions in Florida v. Riley and Kyllo v. United States tell us that surveillance is permitted when it is done at an altitude of 400 feet or using technology that is available to the general public. Where, then, does this leave our Fourth Amendment rights in regard to drone surveillance? On this, the courts have been largely silent; however, one can take these two cases to mean that drone surveillance is acceptable under the Fourth Amendment. Only time, legislation, and further court decisions can tell how our rights will be impacted by this technology.

Another major Fourth Amendment and technology gray area is social media. Should the government need a warrant to search and seize information from your social media accounts? The majority opinion in Katz reads, “[An individual] is surely entitled to assume that the words he utters into the mouthpiece will not be broadcast to the world”.

Does one assume privacy if the information shared on social media accounts is meant to be broadcast- if not to the world- then to a large network of a person’s “friends” or “followers”? For the majority opinion in Katz, Justice Stewart writes, “What a person knowingly exposes to the public, even in his or her own home or office, is not a subject of Fourth Amendment protection”.

The question, then, is whether or not posting on social media constitutes information that a person has knowingly exposed. Furthermore, how does the Jones model fit into modern day society where social media accounts are used to publically “check-in” at various locations? We simply do not know just yet. There has not been coinciding court rulings on these issues. This month, the Supreme Court will hear Carpenter v. United States regarding the constitutionality of a warrantless search and seizure of historical mobile phone records which reveal location information. This ruling is expected to bring more clarity.

Although privacy is not explicitly listed as a constitutionally protected right, the Fourth Amendment works to prevent governmental actors from infringing upon your privacy. While evolving technology may compromise its understanding, the courts still act to curtail warrantless searches and seizures in areas where individuals ought to feel “reasonable privacy”.

If you have been convicted of a crime and feel that your Fourth Amendment rights have been violated during the investigation, please call our attorneys for a free consultation 814-343-0453

To learn more about your rights, check out past editions of our Know Your Rights series: