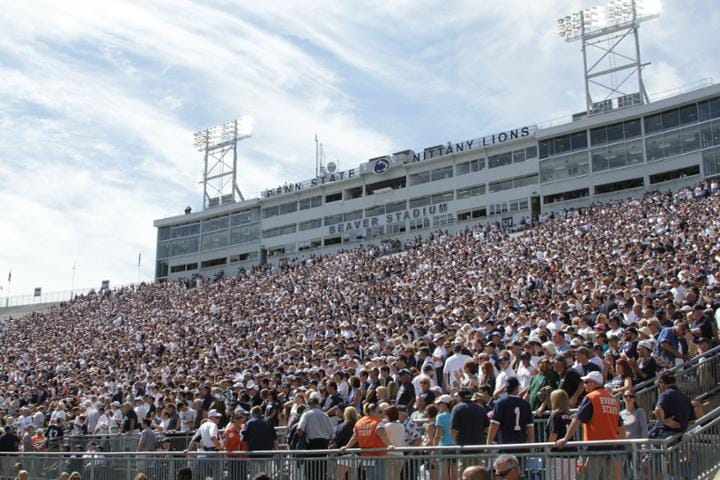 There’s nothing quite like a football game at Beaver Stadium on a beautiful fall afternoon here in State College, Pennsylvania. On a few special days a year over 100,000 football fans descend upon sleepy Happy Valley to hang out in State College, tailgate at the stadium and attend a football game. The “population” of State College swells dramatically as, beginning on the Thursday night before a home game, fans park RVs in the lots surrounding the stadium and settle in for two days of fun with friends and family. Football weekends have a carnival atmosphere and, while drinking is not permitted inside Beaver Stadium, drinking is commonplace around the stadium and is seemingly tolerated by law-enforcement. However, many people have learned the hard way that law enforcement keeps a close eye on the massive party and police are quick to put a stop to behavior that they perceive to be out of line.

Most people who attend football games at Beaver Stadium pay little attention to the intense law-enforcement presence in and around the stadium and have no interaction with police. Nevertheless, arrests in and around the stadium are commonplace and police are swift to act against crime committed around the stadium, particularly drunk and disorderly persons or groups. There are hundreds of law-enforcement officers and volunteers that are detailed to Beaver Stadium on a football afternoon. Penn State has its own police force that consists of full time officers as well as student volunteers who work hand-in-hand with the full time officers. Typically, the entire Penn State Police force is at the stadium on a football Saturday. The State College Police Department has officers at the stadium as well as Pennsylvania State Police officers from the local Phillipsburg and Rockview barracks. Additionally, state police officers from other barracks around Pennsylvania are detailed to the stadium to provide additional law enforcement support. There are horse-mounted local and state police units. There are many undercover officers walking among the crowd. There are snipers/observers detailed to the stadium rooftop. Lastly, many people don’t know that there is a police station in Beaver Stadium itself. Inside the Beaver Stadium police station is a holding cell where persons arrested in and around the stadium are held. Some are released from that holding cell after information is gathered so that a summons or a criminal citation can be mailed to them. Others are transported to the Centre County Correctional Facility where they will be arraigned and bail will be set.

Another important fact to note as that Beaver Stadium and the surrounding area are blanketed with security cameras. There is very little that happens in and around the stadium on a football Saturday that is not observed by one or more cameras.

As a State college criminal defense attorney, I have represented countless individuals who have been charged with crimes that were alleged to have occurred in and around Beaver Stadium on a football Saturday. For the most part, these are very minor offenses such as Public Drunkenness, Disorderly Conduct, Criminal Mischief, Underage Possession of Alcohol, etc. However, from time to time, the offenses can be more serious including alcohol-fueled fights between fans or, worse yet, between fans and law-enforcement.

When a serious offense occurs around Beaver Stadium on a football Saturday, chances are the incident was caught on camera. However, for reasons that are not entirely clear to me, by the time a criminal complaint issues-often a month or two following an incident at the stadium-the security video is long gone. I have encountered this situation far too many times: A complaint and a summons issues two months after an alleged incident at Beaver Stadium. I am then contacted by a client after they receive the summons who insists that the allegations are untrue and that the facts alleged by police are very different than what actually happened. Unfortunately, though video evidence would show what exactly happened, Penn State has about a 30-day retention policy for security video footage from around the stadium. As a result, by the time a “football Saturday” case lands on my desk, the security footage has been overwritten or destroyed.

It is not clear to me whether law enforcement intentionally takes advantage of Penn State’s video retention policy by waiting a long time to issue a complaint or if more benign reasons exist for the delay. Frankly, years of experience living and working as a criminal defense attorney in and around State College have led me to be rather cynical and I believe that police intentionally wait to issue complaints until they are assured no video exists. The absence of video evidence is a major tactical advantage for police and prosecutors: It typically leads to a “he said-she said” scenario between police and defendants and there is a strong bias that favors the law-enforcement version of events. Additionally, defendants were often drinking or drunk at the time of the alleged incident which significantly impacts their credibility. In some situations, due to excessive drinking, defendants have no recollection of the incident(s) and therefore cannot offer a competing version of events. In all cases, long delays in filing a complaint combined with Penn State’s relatively short security footage retention period lead to the destruction of a key piece of evidence that could possibly have been utilized by the defense. So what can be done?

If you or a friend or loved one had police contact at a football game here in State College, Pennsylvania, I would encourage you to contact a State College criminal defense attorney immediately instead of waiting until you receive a summons in the mail. Whether the incident resulted in an arrest or merely a citation, the sooner you contact an attorney, the sooner an attorney can send a “spoliation” letter to Penn State instructing them to preserve security video footage from the date and time in question. By sending such a letter immediately, your attorney may be able to preserve video evidence that could be used to contest or even disprove the allegations against you.

In short, if you had a police contact at a Penn State football game, do not wait to contact a State College criminal defense attorney. I would encourage you to contact Rehmeyer & Allatt immediately so that we can work together to gather all available evidence and put on the best possible defense.