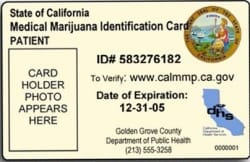 Quite simply, the answer is no.

While a growing number of US States now permit the use, distribution and cultivation of marijuana for medical purposes and a few states, notably Washington and Colorado, have even legalized the recreational use of marijuana, marijuana remains illegal under Pennsylvania law. Furthermore, marijuana remains illegal under Federal law (although to complicate matters, the Obama administration included a rider in the act of Congress funding the federal government through September 2015 which directs the U.S. Department of Justice not to use government funds to interfere with State laws permitting the use, distribution, possession or cultivation of medical marijuana).

The Tenth Amendment to the U.S. Constitution sets forth a fundamental principal to our system of government here in the United States: Individual states are free to enact and enforce their own laws. This can sometimes lead to discrepancies between states which often reveal themselves in the context of controversial issues such as abortion, same-sex marriage and marijuana. Recently, these discrepancies have been brought to my attention in cases involving marijuana prosecutions here in Centre County, Pennsylvania. It sometimes happens that clients charged with Simple Possession of marijuana or Possession of a Small amount of Marijuana have valid licenses for medicinal marijuana issued by another state. Often, these clients feel that their validly issued medical marijuana licenses from California, for example, entitle them to possess marijuana here in the Commonwealth of Pennsylvania. Unfortunately, an out-of-state medical marijuana licenses does not allow you to possess marijuana in Pennsylvania (any more than the legalization of recreational marijuana in Colorado allows you to use marijuana recreationally in Pennsylvania).

In a 2012 Pennsylvania case called Commonwealth v. Waddell, 61 A.3d. 198 (Pa. Super 2012), the Pennsylvania Superior Court addressed the argument of a defendant who claimed that the trial court should have dismissed marijuana related charges against him. The Defendant argued that marijuana no longer fits the definition of a Schedule I controlled substance under the Pennsylvania Drug Act. The Defendant in Waddell correctly pointed out that under Pennsylvania Law, marijuana is considered a Schedule I controlled substance and, according to the Drug Act, a Schedule I substance is one that has a “high potential for abuse, no currently accepted medical use in the United States, and a lack of accepted safety for use under medical supervision”. The Defendant in Waddell argued that this definition should no longer apply to Marijuana; that there were currently accepted medical uses for Marijuana as evidence by the many states that had legalized Marijuana for medicinal purposes. Therefore, the Defendant argued, Marijuana did not fit the description of a Schedule I substance under Pennsylvania law and the possession of Marijuana in Pennsylvania should not be illegal.

Somewhat surprisingly, the Superior Court took this argument very seriously and engaged in a lengthy discussion of marijuana’s medicinal efficacy. While the Waddell court correctly pointed out that the medical marijuana issue is far from settled and continues to be studied, the Court does state that “when it comes to the question of whether marijuana has some potential medical benefits, there appears to be little dispute: It does.” Waddell, 61 A.3d. at 205 (Pa Super 2012). However, the court goes on, stating “[n]onetheless, recognition that there is at least some acceptance of marijuana as medicine in the United States does not, ipso facto, excise marijuana from the list of Schedule I substances…”Id. at 206. Ultimately, the Waddell Court concludes that the Pennsylvania Drug Act does not require that a substance “continuously confirm to the standard that there be ‘a high potential for abuse, no currently accepted medical use in the United States, and a lack of accepted safety for use under medical supervision.”‘

As a State College criminal defense attorney, I see a lot of marijuana cases. Personally, I agree that marijuana should be decriminalized nationally, a sentiment that I often share with my clients. However, the unfortunate reality is that until major changes are made in Pennsylvania through the political process, the law will remain the same and marijuana will remain illegal. I often have to remind my clients that the trial courts of Centre County, Pennsylvania are not the place to lock horns and win the battle over medical marijuana in Pennsylvania. The police, prosecutors, and judges will continue to apply Pennsylvania law until the law is changed, and criminal defense attorneys like me will continue to do everything we can for clients charged with marijuana related offenses.

If you have been charged with a marijuana related offenses here in Centre County, I would encourage you to contact Rehmeyer & Allatt for a free consultation.